Aidan has always played it safe. Instead of pursuing his dream of creating innovative music that makes his soul sing, he settled for a degree in software, a job in a cubicle, and a spot in a generic band with his buddies.

And he’s always been straight. But when he’s seduced by magnetic local literary luminary Dario, Aidan must decide whether to keep playing it safe, or succumb to a ravenous passion and a nourishing love unlike anything he’s experienced before. Will he find the courage to go after real happiness if it means admitting he’s in love with a man?

Their journey together isn’t easy. Sometimes it isn’t safe. Even if Aidan has the courage to admit he’s in love with Dario, can he endure the repercussions of the traumatic event in Dario’s past?

If you’re an avid M/M reader, you might share my opinion that with this genre, terrific covers only happen once in a blue moon. So let’s take a minute to appreciate this glorious cover by photographer Ekaterina Zakharova… 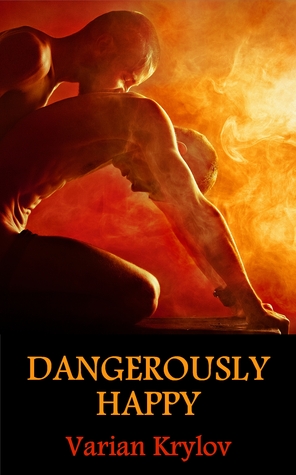 Me: Holy moly! It IS Krylov herself!
Ilhem: Oh My God! Varian Krylov is alive and she’s publishing!!!
Shelley: Oh this is so exciting!
Ilhem: Can I say it again? Krylov is BACK!  Just. WOOT. (…) Some readers are going to be ecstatic! Really, it’s BIG. She’s truly a powerful writer; she reaches deep, her prose is wonderful, but her stories are not for everyone.

Ilhem is right, of course. Krylov expertly plays with out-of-your-comfort-zone subjects that not everyone will fancy. But those who love their darker fare and mind fuckery will be thrilled to be able to plunge into Dangerously Happy. This new book doesn’t touch upon the scariest taboos that are out there though. In fact, it starts out as a deliciously tender gay for you story that combines all the tasty ingredients that come with the trope: the quiet lusting, confusing emotions, blushes, cherry popping and sweet angst.

There’s the blurb, but in a nut-shell; the story kick-starts when Aiden one night misses his band mate’s text about canceling their rehearsal at Dario’s enormous loft, the result of his successful writing career. An awkward Aiden (the enigmatic Dario and he never really hung out before) ends up playing one of his solo songs for Dario and, when he reads an excerpt from one of Dario’s stories in return, he is horrified when the men in the story don’t leave him, ahem, unaffected.

“You know,” he said, his voice lower and softer now, “my book got a rave review from the New York Times. But I like this review better.”
I was nervous. I babbled. “You should actually be proud, because thinking about two guys has never had an effect like this on me before. Not even close.”
“No?”
“No.” (…)
“This is a first for me, too,” he said in that soft low voice I’d never heard before that night.
“What’s a first?” I asked, feeling like every word was a life preserver holding me above the thrashing waves of panic drowning me.
“I’ve never hit on a straight guy before.”

GFY lovers, get in line! And if shy anal virgins aren’t reason enough to lean back and sigh, the narrator’s voice, his emotions, seemed so realistic to me, that it almost felt as if Krylov plucked my own thoughts out of my head and wrote them down. So different from stories in which you have to suspend disbelief when the plot is pushed forward by TSTL MCs who dwell in silly misunderstandings. I have to say, in comparison to Aiden’s voice, Dario’s dialogue seemed overly stylized. Maybe I’m just envious that I don’t have his way with words in real life, but he sometimes came across as a saint rather than a man of flesh and blood.

Back to the story itself. Sweet and endearing as the beginning may be, Dangerously Happy doesn’t remain a cotton candy fest as the plot slowly shifts to dark secrets and past traumas. Since it would be a shame if you pick up this book expecting a fluffily romantic GFY and then suddenly get smacked in the face with both MMF and MMM ménages a trôis (the F stands for graphic scenes containing girly bits here!), I’ll point out these things now. Other potential triggers include; rape fantasies, humiliation, references to rape and, for those who share my pet peeve, the EXCESSIVE usage of endearments (baby, darling, love, sweet) in certain scenes – and in a creepy manner (Krylov mentioned that the surplus of endearments will be given the axe in a next version of the book though, so fear not!).

This doesn’t mean that what started as a beautiful GFY ends up in a depraved sexathon. Despite Dangerously Happy slowly getting grimmer, despite the lovers risking to drift apart over inner demons, their interactions remain ever so gentle and loving, tipping over the edge into sappiness.. at least, on the surface. I think there is more to this book than just a love story between two guys. There’s a creepy undercurrent of cunning manipulation, it can thrive in this uncomfortably imbalanced relationship. I’m sure not everyone will detect or care about this though. Isn’t it interesting that you can choose how to perceive this story?

Sigh! I keep going back and forth without being able to give a resolute verdict… I found that there was a glaring contrast between the first part, perhaps half, of the book and what came after. The sweet and amusing GFY takeoff is easily worth 4.5 stars. As is the writing, because, boy, Krylov can write! But the ensuing soup of loose elements – a thin crime thread, past traumas calling for desperate (but plausible?!) measures, third persons fluttering in and out of the sex life of the MCs – that were all mashed together without a brilliant ulterior motive or even an interesting climax, was a disappointment. In the end, this is an intimate, erotic and eerie read. And as such I would recommend it. But be prepared that it starts on a higher note than it ends and, in my eyes, shouldn’t have been published just yet. It would benefit from a tidying up session, spelling/grammar-wise as well as plot-wise.

Curious about Varian Krylov’s interests, works and prolonged absence? Check back for her guest post next month!