It was never easy to find Loki when he wanted to hide, but he wasn’t doing a particularly good job of it at the moment. Probably he didn’t think anyone from Asgard would be wasting their time hunting for him while the shining ones churned their way steadily through all the realm.

I haven’t been much of a fanfiction reader lately, but I’m a Marvel maniac and I did watch “Thor”. While I cannot say that the movie made a lasting impression on me,  I remember ogling pretty Thor behind my 3D glasses and I remember with interest a malefic and distraught Loki. That’s the baggage I’m bringing in : Thor is the God of Thunder,  Odin’s brat and a Marvel super hero; he has yummy muscles,  a pretty face and a big hammer (wink wink). Loki is the God of Discord, a Marvel super villain, he’s lean, expressive, devious and tormented. All good reasons to jump on a friend’s rec about a Thor/Loki story by Astolat and discover this fanfiction author.

Astolat wrote (among other things) 16 Thor-universe stories that she gathered in a collection titled “Thor Works”. I didn’t read all of them yet, but you can bet that I’m going to, plus every single fic by Astolat that I will find, because she is one of those talented fan artists who seize canon characters and/or storylines,  play with them, develop them and manage to renew them. Astolat winds and unwinds her threads with dexterity,  her writing is a pleasure to read, and I loved her humor.

I chose to review/highlight  “Chaos War”, the 5th story in the collection and my favorite so far. The background is fabulous, an elaborate mix of comics/movie culture, mythology, and her own galloping imagination. It’s a story of war and  schemes, with  battles, challenges to death and a pinch of quest. When the story begins, Asgard is losing the war against the shining ones who will devour everyone in the realm.

In the fourth year of the war, Garðaríki was overrun.

Thor had spent the first retreat, from Bralund, yelling at Odin’s back the entire time. This one, the fifth, he remembered only as a broken sequence of images. The horns sounding the retreat; the palely gleaming slithering thing he slew at the last, a nest of arms and teeth. The demoralized ranks of the Aesir stumbling ahead of him, on to the Bifrost. The dozen scuttling imp-creatures clawing at his leg-armor as he turned away, clutching at his calves and staring up at him with hungry pale lamp-eyes.

He hadn’t bothered to kill them. His feet followed one another through the faintly glittering dust that had once been a fertile field, followed the warriors through the gate and onto the shining bridge. Silently he crossed and silently went through the doors of the great hall of Asgard; silently he climbed the stairs to his chamber, and fell down on the bed still in his armor. He’d been fighting for seven months without a day of rest.

When Odin sends Thor on Loki’s tracks, he finds a rat in a hole, alone, weary, waiting for him and for death.

“Loki’s eyes raised a little to meet his : calm, dark wells, serene, as though they hadn’t ever burned with hate.”

What he gets instead is the opportunity and the burden to rule and lead the Asgardian warriors to victory or defeat. From then on, it’s about Loki’s ever-changing mood and ambiguous nature, about power, surrender and balance, about Thor and Loki fighting side by side. About Loki the Trickster especially, as he doesn’t waste any opportunity to tease, provoke, enrage with witty jabs, and follows a secret agenda that leaves everyone guessing who exactly is tricked.

Above all, it’s about bromance fun.

“This is a magic unknown to me”, the healer said, studying the collar disapprovingly. (…) “There are a variety of rituals. Consent and sexual congress are the only required–”

“Childbearing is not required, of course,” Skeggi said reassuringly.

Her Thor is very much Odin’s golden child,  not quite brutish but still a warrior at heart, all-good, and most of the time – but not all the time – at a loss, long-suffering and upright. Her Loki is a ball of hurt, fragile, cunning, witty – a delight of tormented mischievousness.  Their banter is funny, their moments are sweet, but the pairing is slightly unbalanced. Loki steals Thor’s thunder (sorry, but how could I not?!), which might explain why the sexual tension is lacking, in my opinion,  and the only flaw I could find in this otherwise very good fiction. 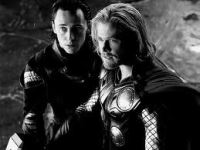 This entry was posted on May 31, 2014 by BdsP in FanFic / FreeFic, Reviewer: Ilhem and tagged 4 Stars, Astolat, Bromance, Fanfiction Week, Marvel, Thor/Loki, War.