Boys in our Books is SO EXCITED to welcome back blog favorite, Heidi Cullinan. We’ll have a 3-part blog series for the next weeks including today’s guest post, next week’s author interview, and the third week’s tandem review of the new title, “Fever PItch”, book 2 of the Love Lessons series!

Serendipity in Writing, or Why K.A. Mitchell is the Bomb

Fever Pitch was supposed to be so many things other than what it ended up being, including that I never meant it to be part of a series, but more on that when I visit Joyfully Jay. Like Love Lessons, drafting this book took months and months longer than I planned and led me down strange and unfamiliar roads before I was able to find its end, which is always my happily ever after.

Because this book came with a bit of desperation, I started grabbing any and everything that worked, and one of those things was a secondary character, the roommate of one of the main characters. Originally I thought he’d just be a cold, jerky roomie, of which I had several during my undergraduate days. Then he wove himself into the plot, and as I got deep into the third act, he whipped off his cloak and showed me all his surprises, including his intention to be one of the leads in book three. I was entranced by him, and I let him do whatever he wanted. He was sassy and mean, but they were all defense mechanisms because of a dark past and a desperate present which became integral to the current story and would frame his soon-to-be one. He was fearless and vulnerable, stripped of defenses and allies and yet gritty to his core.

He’d named himself Elijah Prince, and he was a thin, snarky twink with a past on the streets. And in the middle of the third act, right as he’d insinuated himself completely and utterly into the story, I realized what I’d done.

Some of you have figured it out, but for those who haven’t, I just described a riff on a character in gay romance author K.A. Mitchell’s much beloved character, Elijah Wright. He features heavily in all the Bad in Baltimore series novels, and he shines like a star in his own in that series, Bad Boyfriend.

When I realized what I’d done, I was horrified. Serendipity is a real thing in writing—people accidentally copy titles, write the same novel as their best friend without ever saying a word about it, invent the same character across genres and continents. There’s also, however, subconscious serendipity, which is a real problem for me. I never mean to copy some of the things I do, but I will sometimes end a novel having thought of a particular person and then realize I didn’t just write in a tic or two but end up papering them all over. Ditto places, homages to other authors and works. But this time I felt I’d gone too far. It would have been one thing to have a skinny young kid from the street, but to make him sassy and call him Elijah? I was so horrified I had that sick feeling across my shoulders, spider-webbing out of my heart.

I emailed K.A. and confessed my crime, even though she didn’t even know I’d done it. Somehow I was so horrified I felt I had to lay myself at her feet. Also I realized I couldn’t undo it entirely, but I assured her I’d take away the name at the very least.

Do you know what she did? She told me to leave it.

“Don’t argue with characters when they tell you things like that. They always get mad.” That’s what she told me. I told her I’d credit her awesome in the acknowledgments and pimp her books, which she told me I didn’t have to do, and this somehow led us to talking about how we could wink at each other’s Elijah’s. I won’t hold her to our mutual musings, but when Elijah talks about his friends in Baltimore, you know who he’s talking about.

That’s why K.A. Mitchell is the bomb. I’ve loved her a long time anyway, but that moment pretty much solidified her awesome in my heart. You can learn more about the Bad in Baltimore series, by the way, in a Q&A she did for her characters on my website forums.

And if you don’t know K.A. Mitchell yet, I’m giving you a chance. Whoever wins the copy of Fever Pitch which Boys in Our Books is giving away, I’m adding in a copy of whichever Bad in Baltimore book you want, including the one coming up in December—as in, I’ll preorder it for you from the vendor of your choice. (You totally want to read Bad Behavior. It’s amazing.)

So thanks, K.A., for being so cool. Love from me and Elijah both.

Select the link above to enter in the Fever Pitch Grand Prize Raffle! 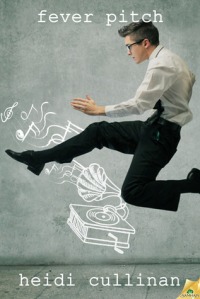 Sometimes you have to play love by ear.

Aaron Seavers is a pathetic mess, and he knows it. He lives in terror of incurring his father’s wrath and disappointing his mother, and he can’t stop dithering about where to go to college—with fall term only weeks away. Ditched by a friend at a miserable summer farewell party, all he can do is get drunk in the laundry room and regret he was ever born. Until a geeky-cute classmate lifts his spirits, leaving him confident of two things: his sexual orientation, and where he’s headed to school.

Giles Mulder can’t wait to get the hell out of Oak Grove, Minnesota, and off to college, where he plans to play his violin and figure out what he wants to be when he grows up. But when Aaron appears on campus, memories of hometown hazing threaten what he’d hoped would be his haven. As the semester wears on, their attraction crescendos from double-cautious to a rich, swelling chord. But if more than one set of controlling parents have their way, the music of their love could come to a shattering end.

Book Page for Love Lessons (book one in the series)

Heidi Cullinan has always loved a good love story, provided it has a happy ending. She enjoys writing across many genres but loves above all to write happy, romantic endings for LGBT characters because there just aren’t enough of those stories out there. When Heidi isn’t writing, she enjoys cooking, reading, knitting, listening to music, and watching television with her husband and ten-year-old daughter. Heidi is a vocal advocate for LGBT rights and is proud to be from the first Midwestern state with full marriage equality. Find out more about Heidi, including her social networks, at www.heidicullinan.com.

This entry was posted on September 15, 2014 by BioB in Blog Tour, News, Uncategorized and tagged guest post, heidi cullinan.