She’s back! Boys in our Books always loves when Heidi Cullinan stops by! Today she’s here as part of the “Sleigh Ride” blog tour to talk about Enemies to Lovers (wheee! Love this trope!) You can read Sara’s review of “Sleigh Ride” HERE.

Enemies to Lovers, or Why Gabriel and Arthur Were So Much Fun to Write

We’re all told the line between love and hate is thinner than paper, but I have to say, I never get tired of watching that old chestnut get proven, or better yet, being the one do offer the evidence.

I’ve written a few enemies-to-lovers now: Double Blind started that way, then Dance With Me, and the first book in the Minnesota Christmas series, Let It Snow. Even so, something about the I-love-to-hate-you in Sleigh Ride feels like a bar set a little higher in my personal list. Randy and Ethan got over their animosity pretty quickly, and once Frankie and Marcus cleared up their misunderstanding, they were home free. Ed and Laurie took a little longer, but I felt like they were pretty unified before too long.

Not so Gabriel and Arthur. They legitimately do not like each other before the novel starts, and they don’t correct that right away, even after they’ve had a round in the sack. Or more to the point, on the couch. They’re very clearly in their own way as far as happiness, but when they start to find a connection in each other, that upsets them so much they try to blow it up. Over and over. In between having kinky sex that surprises them both.

There was something so freeing about writing these two. I think you start writing enemies-to-lovers thinking it’s about venting anger, but very quickly at least for me it always devolves into exposing insecurities. For Gabriel and Arthur especially, admitting happiness with each other means opening themselves up to things that feel dangerous and unsafe. Really, they could have simply had hookup sex, but it’s as if they can smell the potential relationship from word go and get out their claws. No, you can’t give me happiness! I won’t let you!

Thankfully, they have a few personal cupids working behind the scenes to make sure they have no choice but to give in. Writing these two was fun for all the reasons I’ve listed above, but in the end the parts I enjoyed the most was discovering what all that conflict hid. I hadn’t seen their secret desires coming at all. I knew they were both pretty sweet guys deep down, but they surprised me.

Which I hope means they delight and surprise you too. This series has always meant fun to me, a little holiday escape I indulge in every year. In a few days I’ll start book three, so poor Paul can finally find his match. I know who he’s partnering with, and that’s already been a surprise. I don’t yet know how it all pans out, but while you’re enjoying Gabriel and Arthur, I’ll be trudging through the Logan snow to bring you another tale of Winter Wonderland.

Not yet sure if Paul and Kyle will be enemies to lovers or not. However they get there, I promise it will be full of sexy fun.

Arthur Anderson doesn’t want anything to do with love and romance, and he certainly doesn’t want to play Santa in his mother’s library fundraising scheme. He knows full well what she really wants is to hook him up with the town’s lanky, prissy librarian.

It’s clear Gabriel Higgins doesn’t want him, either—as a Santa, as a boyfriend, as anyone at all. But when Arthur’s efforts to wiggle out of the fundraiser lead to getting to know the man behind the storytime idol, he can’t help but be charmed. The least he can do is be neighborly and help Gabriel find a few local friends.

As their fiery arguments strike hotter sparks, two men who insist they don’t date wind up doing an awful lot of dating. And it looks like the sleigh they both tried not to board could send them jingling all the way to happily ever after.

Heidi Cullinan has always loved a good love story, provided it has a happy ending. She enjoys writing across many genres but loves above all to write happy, romantic endings for LGBT characters because there just aren’t enough of those stories out there. When Heidi isn’t writing, she enjoys cooking, reading, knitting, listening to music, and watching television with her husband and teenaged daughter. Heidi is a vocal advocate for LGBT rights and is proud to be from the first Midwestern state with full marriage equality. Find out more about Heidi, including her social networks, at www.heidicullinan.com. 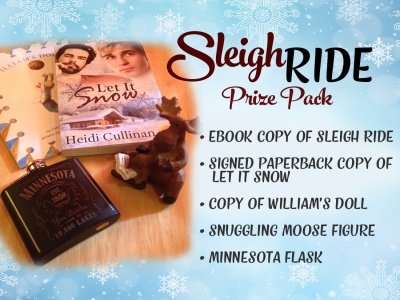 This entry was posted on November 13, 2014 by BioB in Blog Tour, Giveaway and tagged giveaway, guest post, heidi cullinan, samhain.