FAVORITE BOOK OF THE YEAR:

“Think of England” by KJ Charles 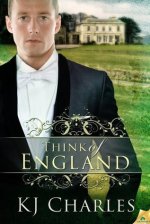 As much as I love Charles’ A Charm of Magpies series (the first book of which was my top book for last year), I didn’t go into Think of England with gonna-love-it feelings. I love historicals, especially ones with mystery/suspense, but am not part of the throngs of Downton Abbey fans, so wasn’t quite sure what to expect with this Edwardian tale of disabled veteran Archie trying to ferret out shady war saboteurs in the middle of a group vacay at a country estate. Little does he know that he has much in common with the outwardly very-gay poet Daniel, who has secret plans of his own…

It was a super-slow start for me, but somewhere in there, I started digging it, and then a big reveal, and then wow, Archie is sure surprised, and wow, did Archie sure fall for Daniel, and wow, that one rescue scene, and wow, and oh-my, and I-love-Pat-and-Fen, and I-can’t-stop-reading, and oh-no-he-didn’t, and YES and oh-my-god-where-is-book-2, Charles? CHARLES??

More than any other book this year, I found myself falling back to this one, to reread my favorite parts, to sigh a little bit, to shake my fist at the author when she revealed book 2 will come out in mid-2016. (2016!!!!) But even as I’m giving England the stink eye, I still whole-heartedly love this book and Archie & Daniel, and their slow progression towards each other. It is a thrilling and delightful read, and I only wish I could watch it as a Masterpiece Mystery some Sunday night, because damn, Daniel would be awesome on TV. 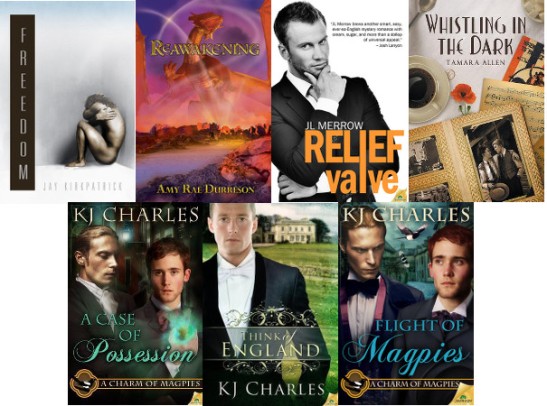 Overhyped book of the year

This is always a hard one for me. I’ll be honest and say that I’m probably contributing to the over-hype over “Think of England“. :-)

Underhyped book of the year

(Why haven’t more people read this?):

A couple come to mind. Freedom by Jay Kirkpatrick, released in 2013, was a great sci-fi story, and a bit under-the-radar as it’s the author’s only release so far. I see it as more sci-fi than romance, but still an excellent story. I think JL Merrow’s Plumber’s Mate series is AWESOME (book 2 Relief Valve came out this year.) I find it less known than her other contempories, but it has one of my favorite narrators ever. Lastly, City of Soldiers by Sam Burke was also a very compelling read, but again, not a traditional romance. Burke is a really good writer, so my hope is she’ll get more attention.

Best surprise of the year

(didn’t know what to expect or the story caught you off guard or anything that just…surprised you…):

Lyn Gala’s Claimings series, which starts with Claimings, Tails, and Other Alien Artifacts, and in 2014, we saw book 2, Assimilation, Love, and Other Human Oddities come out. I think I went in thinking this series would be a light excuse for sexy times in space, but I was surprised how much I dug Gala’s world-building and her attention to creating the Rownt people. (They remind me of the Ferengi in Star Trek, but taller and sexier and purple.) It’s a really imaginative, fun series, and I’m glad I finally dove in, and now am hopeful for a third book with Liam and Ondry.

(I’d buy anything these authors write, without a doubt):

I don’t auto-buy with many since I steer away from straight-up contemporaries, but those I tend to pre-order without thinking are:

My reading experience in 2014:

I don’t know how to sum up this year…

1) It was way less this year. Compared to 2012 (200+ books) and 2013 (100+ books), I got close to 60 books in this year, plus some number of fanfic. This is mostly due to working a lot at a new job, plus running the volunteer-initiative Gay Romance Northwest, pestering Jeff Bezos, and advocating for connecting queer romance to community resources. I’ll be honest and say I often look mournful at my ereader and wish I could just drop everything and read without having a stop time.

2) Revealing publicly for the first time about being asexual in a book review was probably one of the scariest and most anti-climactic things that happened this year. But even if it felt scary then, it made sense in a weird way to me, since falling in love with queer romance books has brought so much to me, including helping add perspective about all the different kinds of love stories that can exist. They have also helped teach me how important it is to stand up for all these many kinds of love stories, especially if they are less known about or less accessible.

What I’m hoping for/looking forward to in my 2015 reading journey?

One of my 2015 goals is to really focus on the 200+ stories on my ereader that are not read yet, and to try to work through them. (Stop hoarding and read them!) If I can get through 20-40 of those, that’s good progress.

For what books I’m looking forward to in 2015 (and here’s a handy list), Plumber’s Mate #3 Heat Trap by JL Merrow, KJ Charles’ novel-length The Casebook of Simon Feximal, Ill Met by Moonlight by Josh Lanyon (sequel to the 1930’s historical This Rough Magic), Not so Innocent by Dani Alexander, and Against the Grain by Charlie Cochet. (Cael/Ash’s books! Cash!) :D

I’d love to hear what books YOU are most looking forward to next year though. It sure is fun to get excited together. :-D