AUDIOBOOK WEEK REVIEW: “Among the Living” by Jordan Castillo Price

Victor Bayne, the psychic half a PsyCop team, is a gay medium who’s more concerned with flying under the radar than in making waves.

He hooks up with handsome Jacob Marks, a non-psychic (or “Stiff”) from an adjacent precinct at his ex-partner’s retirement party, and it seems like his dubious luck has taken a turn for the better. But then a serial killer surfaces who can change his appearance to match any witness’ idea of the world’s hottest guy.

Solving murders is a snap when you can ask the victims whodunit, but this killer’s not leaving any spirits behind.

Among the Living is a short beginning entry into the world of PsyCop. We have Victor Bayne, a psychic detective who can see, hear and interact with the dead. He’s also an addict of sorts and very antisocial. Did I mention  he’s also hilarious?

The story focuses on a series of murders that are different from Vic’s previous cases – he can’t find a trace of the victims’ ghosts! Not only that, but there’s this very hot, non-psychic detective by the name of Jacob Marks that has landed on Vic’s radar.

The story itself can be gruesome – we are talking about a guy who sees dead people. Details are pretty vivid, and that’s what I like. The world building is exceptional – a modern day America with the existence of people with psychic abilities. Jordan Castillo Price definitely nailed it in terms of making this slightly-different world very believable.

The characters are a blast. You can’t help but be drawn to Victor’s car wreck of a personality – antisocial, witty, slightly bitter, awkward, etc. Then there’s Jacob – the alpha male with a slight fetish for people who see the dead. But worry not, as the world of PsyCop has a whole crew of characters that are all very distinct and a blast to experience.

In terms of the plot, Among the Living was not very memorable. It was definitely more shallow compared to the later entries for many reasons: it’s shorter in length and there was a lot of groundwork to lay in terms of world building. Sure, there was a romance (or beginnings of one), but we don’t get very much development with this entry.

Overall, the book would get a 3.5 star. But the audiobook gave a different type of enjoyment. Gomez Pugh did a great Victor – that slightly slow and sarcastic drawl to his voice is perfect! Furthermore, each character had a distinct voice that made them recognizable. However, I wasn’t too fond of his voice for Jacob – more of a personal preference. The reading pace was fine, and Pugh’s voice had the right amount of emotion to avoid monotone.

The fact that I could hear the perfect Victor voice made this a 4 star listen. I would recommend this for veterans wanting to revisit the good times, and for newbies who want to dab into the world of PsyCop for the first time. 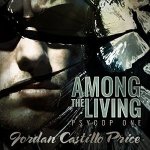 2 comments on “AUDIOBOOK WEEK REVIEW: “Among the Living” by Jordan Castillo Price”