GUEST POST & GIVEAWAY: “To Love a Traitor” by JL Merrow

Boys in our Books welcomes JL Merrow to discuss her new book “To Love a Traitor”!

Hi, I’m JL Merrow, and I’m delighted to be here at Boys in Our Books as part of the To Love a Traitor blog tour!

Today I’d like to talk about the mysterious goings-on in room 40.

No, it’s not a hotel room where my heroes have their assignations. ;)

Room 40 was the typically understated name of the department of British Naval Intelligence that housed the first world war cryptographers. We’ve all heard of Alan Turing and the Enigma machine from World War Two—well, one of their forerunners was Room 40, and it’s here that I’ve suggested my conscientious objector hero George finally found his wartime billet. (Sadly for fans of a certain Ms Cochrane, he got there just too late to encounter Cambridge Fellows Jonty Stewart and Orlando Coppersmith!)

The real Room 40 was staffed by a motley crew, mostly of classicists, linguists and men invalided out of the Army, but also including a caricaturist, a critic and a couturier, to name but a few.

There were some definite characters among them. One of the most brilliant cryptographers, Alfred Dillwyn ‘Dilly’ Knox (another Cambridge fellow), for example, had a bath installed in his office in Room 53, and claimed to do his best work in an atmosphere of soap and steam. He was immortalised in the following verse:

The sailor in Room 53
Has never, it’s true, been to sea
But though not in a boat
He has served afloat –
In a bath in the Admiralty.

(Dilly’s younger brother, a Catholic priest, was also recruited to Room 40. He didn’t stay long, and later admitted he was never really sure what he was supposed to be doing there! I feel I might have got on well with Knox minor.)

Would they really have taken a CO? Well, remember this was in the days when the old boy network held even fuller sway than it does now, and George, under his real name of Roger Cottingham, was fortunate in his connections.

A key moment in Room 40’s history was the interception and decryption of the Zimmermann telegram. This was a message sent by German Foreign Minister Arthur Zimmermann to Mexico, offering them US territory should they side with Germany in the war.

Publication of this telegram had the direct effect of drawing the US into the First World War, changing the course of history.

In 1919, Room 40 was merged with the British army’s intelligence unit MI1b to form the Government Code and Cypher School. Dilly Knox went with it to Bletchley Park during World War II—where he counted among his colleagues the mathematician, Alan Turing.

Question: Could you have made it as a cryptographer? Or does the sight of a Sudoku send you screaming for cover?

Giveaway: I’m offering a free ebook from my backlist to a randomly chosen commenter on each blog post.

And there’s a grand prize of a signed paperback copy of To Love a Traitor for one lucky commenter on the tour. I’m happy to ship internationally, and the more blog posts you comment on, the more chances you get!

JL Merrow is that rare beast, an English person who refuses to drink tea. She read Natural Sciences at Cambridge, where she learned many things, chief amongst which was that she never wanted to see the inside of a lab ever again. Her one regret is that she never mastered the ability of punting one-handed whilst holding a glass of champagne.

She writes across genres, with a preference for contemporary gay romance and mysteries, and is frequently accused of humour. Her novel Slam! won the 2013 Rainbow Award for Best LGBT Romantic Comedy, and her novella Muscling Through and novel Relief Valve were both EPIC Awards finalists. 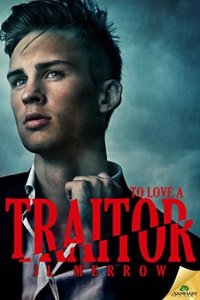 Wounds of the heart take the longest to heal.

When solicitor’s clerk George Johnson moves into a rented London room in the winter of 1920, it’s with a secret goal: to find out if his fellow lodger, Matthew Connaught, is the wartime traitor who cost George’s adored older brother his life.

Yet as he gets to know Matthew—an irrepressibly cheerful ad man whose missing arm hasn’t dimmed his smile—George begins to lose sight of his mission.

As Matthew’s advances become ever harder to resist, George tries to convince himself his brother’s death was just the luck of the draw, and to forget he’s hiding a secret of his own. His true identity—and an act of conscience that shamed his family.

But as their mutual attraction grows, so does George’s desperation to know the truth about what happened that day in Ypres. If only to prove Matthew innocent—even if it means losing the man he’s come to love.

Warning: Contains larks in the snow, stiff upper lips, shadows of the Great War, and one man working undercover while another tries to lure him under the covers.

Available in ebook and paperback: Samhain | Amazon US | Amazon UK | ARe

19 comments on “GUEST POST & GIVEAWAY: “To Love a Traitor” by JL Merrow”

This entry was posted on September 22, 2015 by BioB in Giveaway, Guest Post and tagged giveaway, jl merrow, samhain.