Germany, 1945. The Third Reich is on its knees as Allied forces bomb Berlin to break the last resistance. Yet on an airfield near Berlin, the battle is far from over for a young mechanic, Felix, who’s attached to a squadron of fighter pilots. He’s especially attached to fighter ace Baldur Vogt, a man he admires and secretly loves. But there’s no room for love at the end of the world, never mind in Nazi Germany.

When Baldur narrowly cheats death, Felix pulls him from his plane, and the pilot makes his riskiest move yet. He takes a few days’ leave to recover, and he takes Felix with him. Away from the pressures of the airfield, their bond deepens, and Baldur shows Felix the kind of brotherhood he’d only ever dreamed of before.

But there’s no escaping the war, and when they return, Baldur joins the fray again in the skies over Berlin. As the Allies close in on the airfield where Felix waits for his lover, Baldur must face the truth that he is no longer the only one in mortal danger. 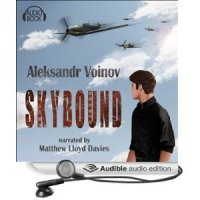 Clocking in at under an hour and a half, Skybound really is a low risk audibook to try.

I’m a part of a book club that has been friends for almost 3 years now. Skybound was one of those gems that we all read and loved together…that we raved about. So when Aleksandr Voinov announced he was releasing it in audio, we jumped on board to do a ‘reread’. WHAT A TREAT.

Matthew Lloyd Davies narration was flawless. It’s my first audiobook by a “non-American” narrator, and I wondered how I’d take to the accent. Davies voice is like butter…smooth and soothing. And as I listened, I felt swept away into the scenes of the story, yet shielded from the war that set the stage. I was enraptured in the deep affection between Felix and Baldur, but reminded of the time and place of their forbidden relationship. Between Voinov’s writing and Davies’ narration, I was so caught up in every emotion…I felt it all deeply.

If you haven’t read the book or listened to the audio, this is one that I would highly suggest doing both. It’s a love worth knowing over and over again.

If I could describe how really amazing this is, I’ll leave you with this: our bookclub, after listening to the audiobook, got together to discuss (virtually). I would leave you with notes from the discussion, but it basically went like this, “I loved it!” “OMG, so did I!” “Did you love it?” “I did! I’ve listened to it 3 times already!” “I didn’t know I could love the story any more than I already did!” “Don’t you just love it enough to go back and listen again?” …and there you have it.  We loved it.